Long, long ago in the dead of night,
the sky tore and Dark Blood gushed out like a waterfall.
The Dark Blood engulfed the sun, putting out its radiant flame.
The once brilliant sun froze over and lost all of its glory.
All the land of Usher was left with was the desolate crack of dawn.
Kingdoms collapsed,
and cities soaked in blood spiraled into a deep, dark abyss.
Conceived by the Dark Blood, monsters arose and invaded the land.
The Kindred took in the Twelve Knights
who emerged from the torn sky, holding goblets of blood.
The Pixies reclaimed the plains as their own and started a campaign
to construct an era of madness and chaos.
The Spirits, ejected from distorted time,
roamed aimlessly, neither dead nor alive.
Then, in the midst of doom,
a mysterious existence began to shine in place
of the sun and the moon.
It was none other than the Morning Star.
As the sole remaining source of light,
the Morning Star descended from the sky
to organize a resistance against death and corruption.
Thus, the Church of the Morning Star was born.
Now the world is divided into two camps:
those who have succumbed to corruption and those who resist it.
When will this dichotomy come to an end?
Who will be the ultimate survivors? 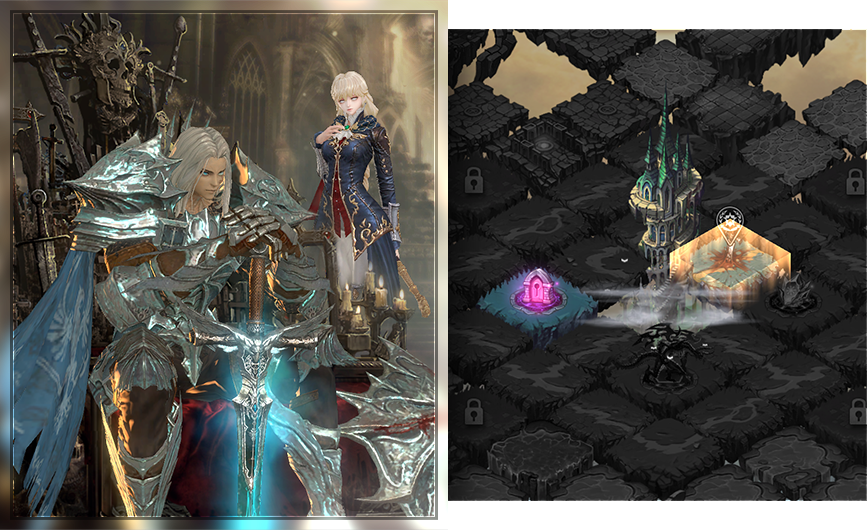 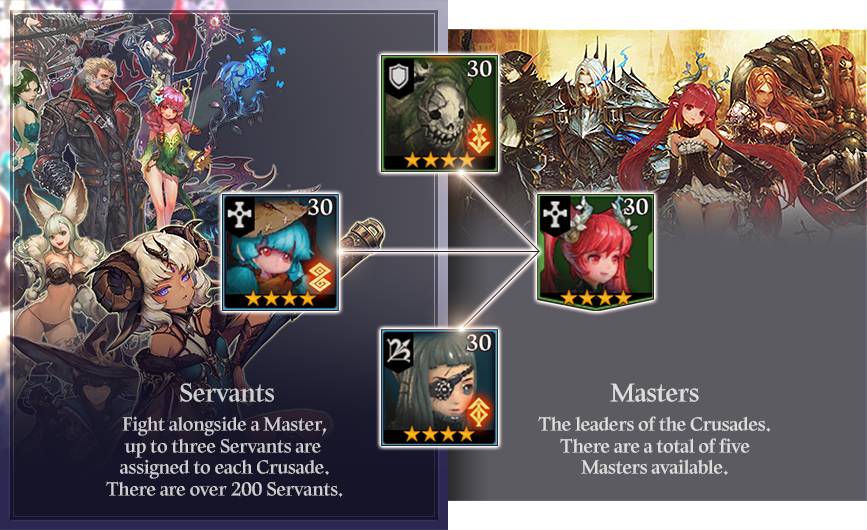 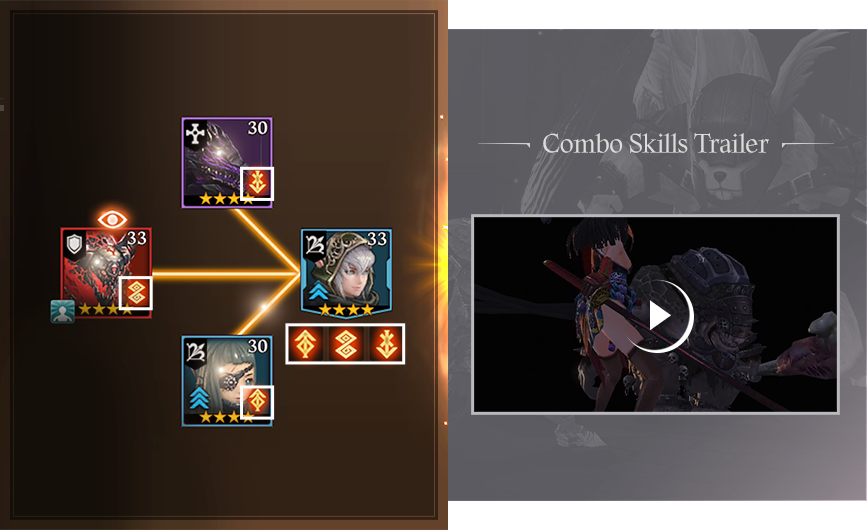 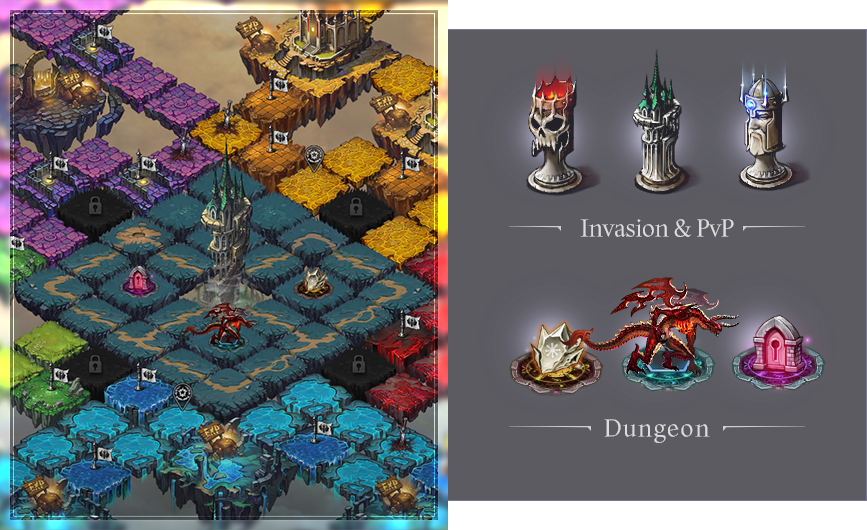 In a world contaminated by the Dark Blood, Heirs lead the Hinterlands
Diocese in a mission to defeat enemies and liberate the corrupted diocese.
Each Heir will organize a Crusade to battle enemies.

A Crusade consists of a Master and Servants, each of different Elements and Classes.

All Masters and Servants have a unique Mark. Assign a Servant whose ark matches that of the Master in order to use a Combo Skill.

In HEIR OF LIGHT, you can proceed in any direction you desire on the World Map.
Put your strength to the test! Challenge yourself to Invasion, Tower Invasion, and PvP.
Claim valuable rewards at Omen's Void and Magic Dungeon.

Also known as Heir Font, it is the official font used by the Church of the Morning Star.

The font is based on a book passed down by Morning Star, the head of the church and the savior of mankind, in order to protect humanity from the Dark Blood. The book features a Braille transcription in diamond shapes reminiscent of stars.

However, the scholar vanished as soon as he finished translating the book, and never returned to the church again.

As a result, the font had existed without a proper name.

Seeing this, Morning Star named it "Heir Font" to pay respect to the scholar who acted as the hero of mankind, and designated it the official church font. 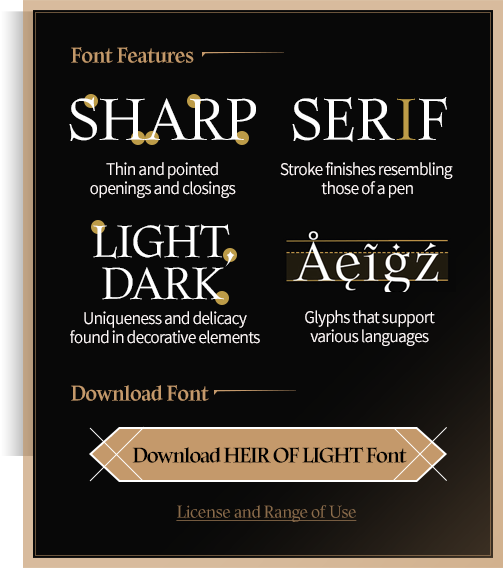 After downloading, set GAMEVIL, Inc. as a trusted app under
[Settings > General > Profiles & Device Management]
Mobile downloads only.
* Download is only available when connected to wifi. 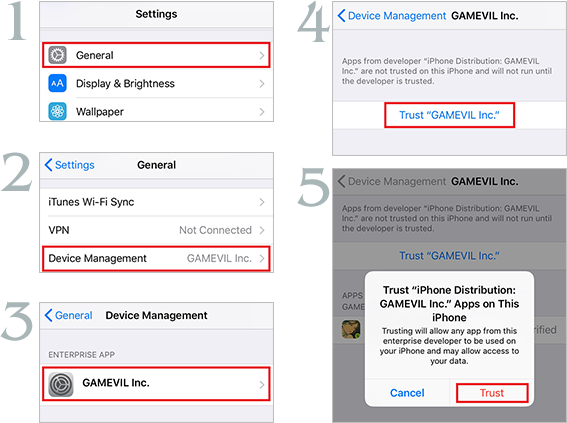 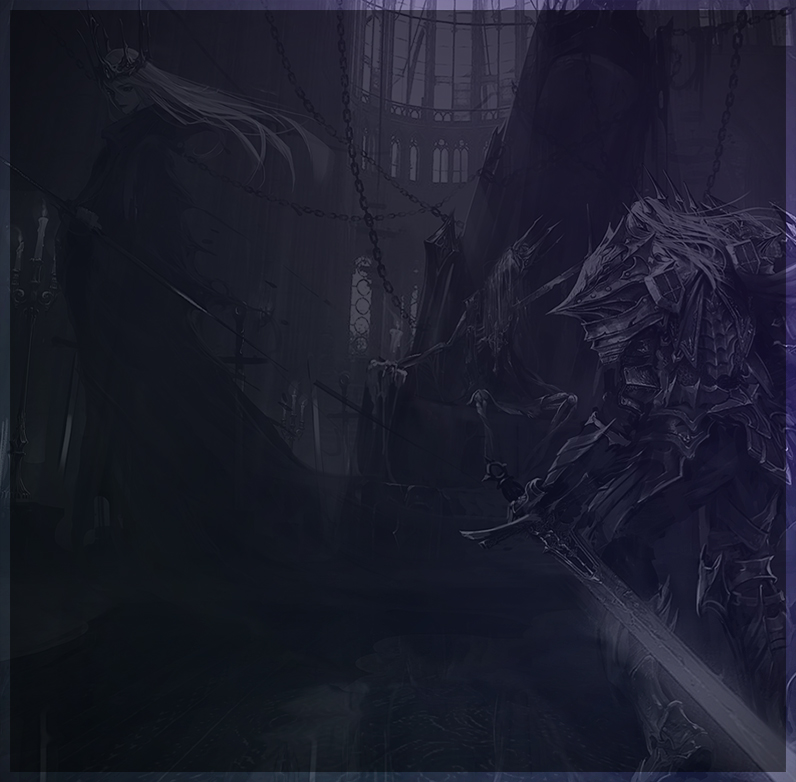 The ‘Heir of Light’ Global CBT
has ended

We will keep you posted on the upcoming events
and announcements through our forum.

Follow us and be the first to see what’s new.

The intellectual property rights of the Heir Font belong to FUNFLOW
(www.funflow.co.kr) and Sandoll Communications (www.sandoll.co.kr).
The Heir Font is free for both individuals and businesses and may be used for commercial purposes.
The Heir Font may not be used for the following commercial purposes without written consent from rightsholders:
1. Selling the font
2. Editing, modifying, and redistributing the font
3. Embedding and using the font in console/PC/portable/mobile games or devices and programs associated with games
All works that use the Heir Font may be used for promoting the font and game without compensation, and by using the Heir Font you agree to such utilization of the works.
If you do not agree to the policy, please contact us for consultation.
Contact: FUNFLOW (www.funflow.co.kr)